Designer Crush – this one could be love!

Marc Newson is a rather clever fella! I remember the first time I heard his name, Madonna was lounging upon a cool metal loungey chair that looked oddly enticing in a ‘who cares about comfort’ type way in her film clip ‘Rain’.

Apparently an Australian Industrial designer had made this chair – his name, Marc Newson. My Design Crush began…

Since his Madonna days, he has been a clever and rather busy fella! Designing bags for Samsonite, a concept car for Ford, lots of stuff for Alessi, first class lounges at the Melbourne Airport (that I am unlikely to ever see!) and the odd cool bar and restaurant in NYC, a hotel in Madrid, Boutiques in Berlin, a lighting gig for the Sydney opera house at the Olympic Games in 2000, And, ofcourse I cant forget to mention a jet AND space plane. Variety IS the spice of life, as it is said!!

He is Uber cool. My Designer Crush could be love…

Marc Newson - where my crush began - The Lockheed lounge 86-88. Pic via Design Boom 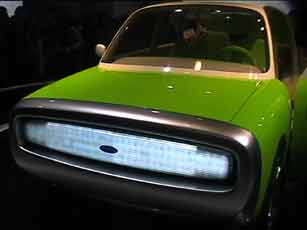