Ticking clocks in the night

My bedroom as seen on Apartment Therapy

I stumbled across something that amused me greatly whilst flipping (well, scrolling!) through Apartment Therapy the other day!

It was an article about restful bedrooms & a ‘how to’ on getting a better nights sleep.  But why it particularly hit my sensor radar was that the picture used in this blog post is MY bedroom!!!

Its highly amusing to find these things and also I am kinda unsure if MY room is considered restful or not?!!!! I DO sleep well!!!

What I found particularly amusing and what had me grinning from ear to ear where the comments that some readers had made about the room!!  In particular, the array of alarm clocks I have on my bedhead!

I have a bit of a ‘thing‘ for kooky alarm clocks! Its not a fully developed obsession, just a bit of a ‘commited’ flirting!

I know it seems a bit of over kill, six alarm clocks over head.

But just to assure you that my sanity is intact (um…don’t ask the fella about that though!!) only ONE of those works! The rest are purely decorative!

Argh! Imagine the sound of 6 alarm clocks ticking away over head! Ouch! it hurts, just to think it! 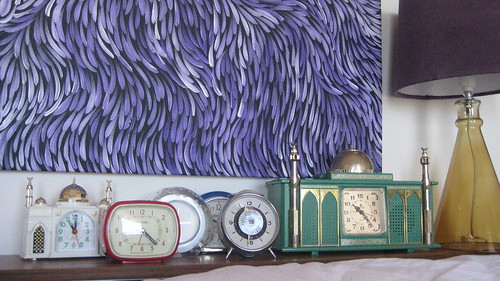 The other comments that readers made  were of the painting that also lies overhead. It IS quite full on, but  I think its fabulous!

It is by an Indigenous Australian artist ‘Caroline Numina Panaka’ and I have to thank the lovely Steve at  The Blue Door Gallery, for he showed me the way! The photos of it don’t really do it justice! The intricacy and detail is quite astounding!

Last of all, some AT readers made comment to the puss cat lying on the bed!  All positive! So this is really JUST an excuse to post a picture (OK, two) of my boy “Trevurr”.

‘fella’ and I had a bit of a disagreement over which picture of our perhaps spoilt and over loved puss cat “Trevurr” (why fella thought he had a say?) but to appease him I have included both! 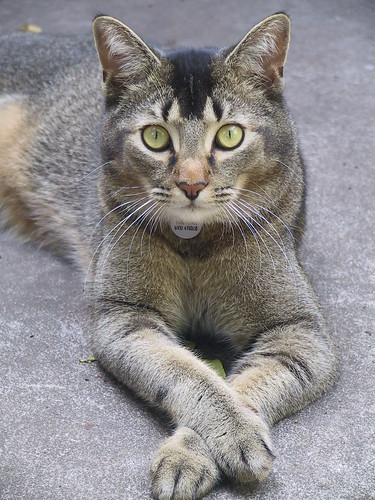 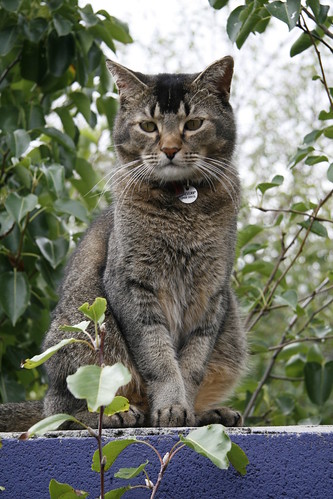