And breath out again and hear ones thoughts… Ah, its gone and done for another year and I now have some peace and quiet once more. Ah. that’s nice.

oh, best I fill you on on what I’m talking about! So you don’t feel all left out and unloved!

So: I live (and work) a very short 2 blocks away from the  serene, peaceful and picturesque Albert Park lake.

Quite pretty isn’t it! – on the edge of the city right by the bay….lovely -if you haven’t yet visited, you must – its lovely……. OK, that’s my tourist gathering bit done! 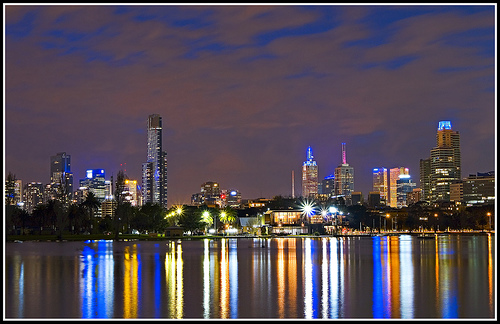 Once a year, for 4 looong days the quiet lake transforms from the pretty picturesque lakeside it tis, into a Grand Prix circuit full of ear bleed loud cars, bucket loads of beer, busslings of busty broads and bogans!! 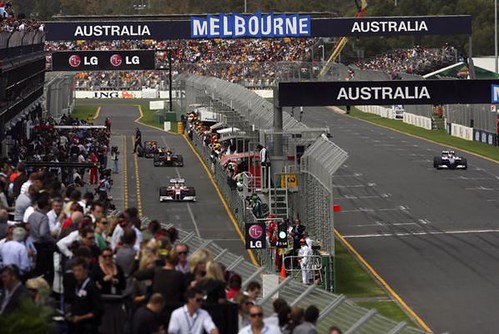 Image via The Age - pic by Viki Lascaris

Yesterday for a couple of hours I joined the busslings of busty broads and bogans and tottered track side to see what all the fuss and noise was about! In case you were unsure, its about ear bleed loud cars, bucket loads of beer, busty broads and plenty of bogans! AND that’s about it really!

Not being a car motor head person it is lost on me somewhat, but I do admit – its hard to not smile and get a grin from ear to ear when the giant mosquito roars past at 300kms an hour! 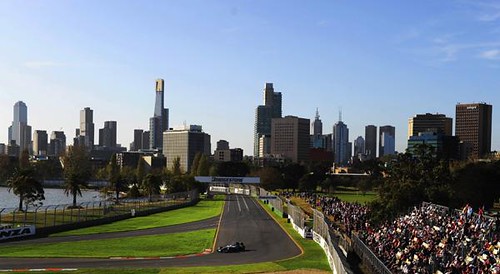 Image via The Age - pic by John Donegan

And I have to confess, I cant help but giggle like a school girl when the cool fighter planey things do their low flyovers!  Each day of the Grand Prix the plane roared repeatedly over my house sending Trevur the cat scuttling for the safety of under the bed and me into the street to watch it do air ‘doghnuts’.

I think I might be a fighter pilot when I grow up. Except the fighting bit, and the fact that I am a grown up… 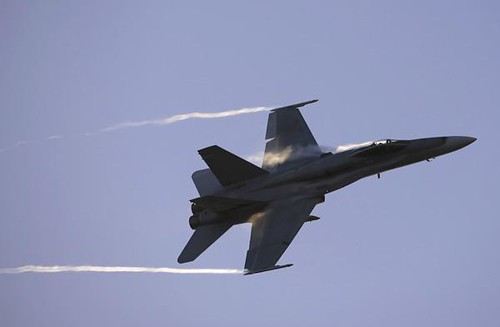 Image via The Age - pic by John Donegan

The whole event finished up last night with a concert where 70’s rock gods (!?) The Who played on! I didn’t go to see them, but heard them live from my garden and repeatedly said to the fella : ‘Oh, I didn’t know they did THIS song!’

So that’s whats been going on in my ‘real’ world of late! Not very design worthy – but my blog so I can do what I want!!!

One of these days I will do a proper post once again, as I have been a little lax in that of late due to being really busy and important!!!!!