I am a little obsessed with these lacquered numbers! I want them SO bad and I am in the early stages of hatching a plan to get my hands on em!!

I have NO idea what the quality is like – and if in fact they ARE worthy of my obsession – but its a wooden box, its red , its lacquered = the odds look good!! 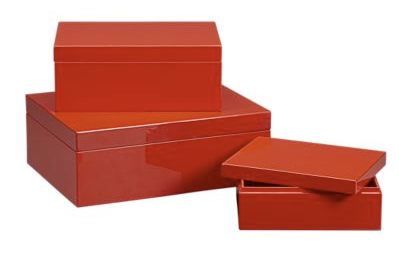 The problem is, they are from Crate and Barrel – a store we don’t have that store here in Australia so getting my hands on them will be a lil trixty and take a bit of sweet talking on my part! The current exchange rate isn’t in my favor – so is it even worth it? Its a risk to take when its only one studio pic I have seen.  Are they worthy of my love?

I really only even know of Crate and Barrel through the blogosphere and by it featuring once in an episode of ‘Friends’: Rachel had bought a coffee table and was pretending to Phoebe that she bought it from a flea market. OH I’m sure you can imagine the hilarity that followed! (um – recently watched re runs!!)